Home » Introduction » History of the Genre

A Short History of Babylonian and Assyrian Text Commentaries

Babylonian and Assyrian text commentaries represent the oldest well defined and cohesive group of text commentaries worldwide. The earliest dated commentary tablet from Mesopotamia known so far, K.8014 (CCP 3.4.10.D.i, see image on the left), was written in 711 BCE by the Assyrian scribe and scholar Nabû-zuqup-kēnu, a citizen of Kalḫu. It was later added to the holdings of the famous libraries of the Assyrian king Assurbanipal (669-631 BCE) in Nineveh. Like nearly all commentaries from ancient Mesopotamia, it was written in Standard Babylonian, a language used by Assyrians and Babylonians alike for literary and scholarly texts. 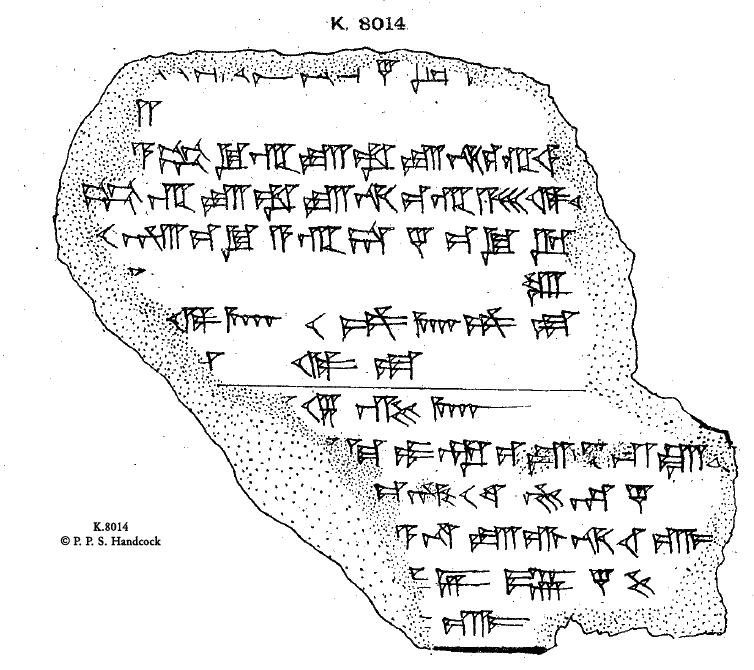 Assurbanipal’s libraries, formed in the mid-seventh century BCE, included hundreds of text commentaries. A few explain mythological, ritual, literary, and lexical texts, but most of them are concerned with texts about various branches of divination, such as astrology, extispicy (determining future events through the study of organs of sacrificial animals), physiognomy (judging the character and fate of an individual from bodily characteristics), and the interpretation of terrestrial signs and malformed births. In an autobiographical text about his education, Assurbanipal claims that he studied a difficult commentary on extispicy during his youth and discussed it with the greatest scholars of his age. An important reason for the king’s interest in commentaries on divinatory texts was that they helped him and his advisors in their efforts to negotiate between the observation of an ominous event, relevant entries in the omen series, and the political exigencies of the day. When, for instance, the Assyrian army was about to conquer a foreign city and a celestial phenomenon occurred that seemed inauspicious according to a literal reading of a relevant omen, a non-literal interpretation of the omen, provided by a commentary, would allow the army to proceed.

Catalogs and colophons indicate that Assurbanipal’s libraries included not only text commentaries on clay tablets, but also quite a few that were written on wooden boards covered with a layer of wax. Because of their perishable nature, only very few Assyrian wax tablets survived, though, and none of them are inscribed with commentaries.

Origins of the Genre

Clay tablets with text commentaries from the eighth and seventh centuries BCE are known so far from the Assyrian cities Nineveh, Kalḫu, Assur, and Ḫuzirina (Sultantepe). But the Assyrian scholars and kings of this time were clearly not the first to write and study such treatises. Subscripts on many of Nabû-zuqup-kenu’s and Assurbanipal’s commentary tablets reveal that they had been copied from tablets from cities in Babylonia, Assyria’s neighbor, political rival, and cultural model in the south. Even though, due to the chances of discovery, no actual commentary tablets securely datable to the time before the sixth century BCE have yet been found in the Mesopotamian south, it was there, in all likelihood, that Mesopotamian scholars first composed commentaries on literary and learned texts. The beginnings of their exegetical endeavors may go back to the end of the second millennium, when Babylonia experienced a flourishing of scribal activity. This activity reached its peak when Esagil-kīn-apli, personal scholar of the 11th century king Adad-apla-iddina, reorganized ancient divinatory, medical, and magical texts in a number of newly composed series.

While it cannot be proven that Esagil-kīn-apli was also involved in the creation of the earliest commentaries, there is little doubt that the emergence of a commentary tradition in ancient Mesopotamia is closely linked to the creation of a new corpus of canonical or semi-canonical texts, texts that were regarded by later Babylonian and Assyrian scholars as perfect and unchangeable, but in need of clarification. It is also obvious that the new genre was not without precedent – the scholars who composed the first text commentaries could draw on earlier Mesopotamian traditions of interpretation, especially in the realm of omens and in lexicography and translation. There was, moreover, an earlier corpus of texts with glosses.

Virtually all available commentary tablets from Babylonia were written during the half millennium that followed the downfall of the Assyrian empire in 612 BCE. Found in Babylon, Borsippa, Sippar, Nippur, Uruk, Dilbat, and Ur, they date from the sixth century to ca. 100 BCE. Many of them were apparently the work of advanced students, who copied them as part of their education. But the commentaries did not only have a didactic function, they also served as reference works in their own right. This is indicated by the fact that they were kept in libraries of temples and private houses, often faithfully copied, and occasionally borrowed and even transferred to other cities. 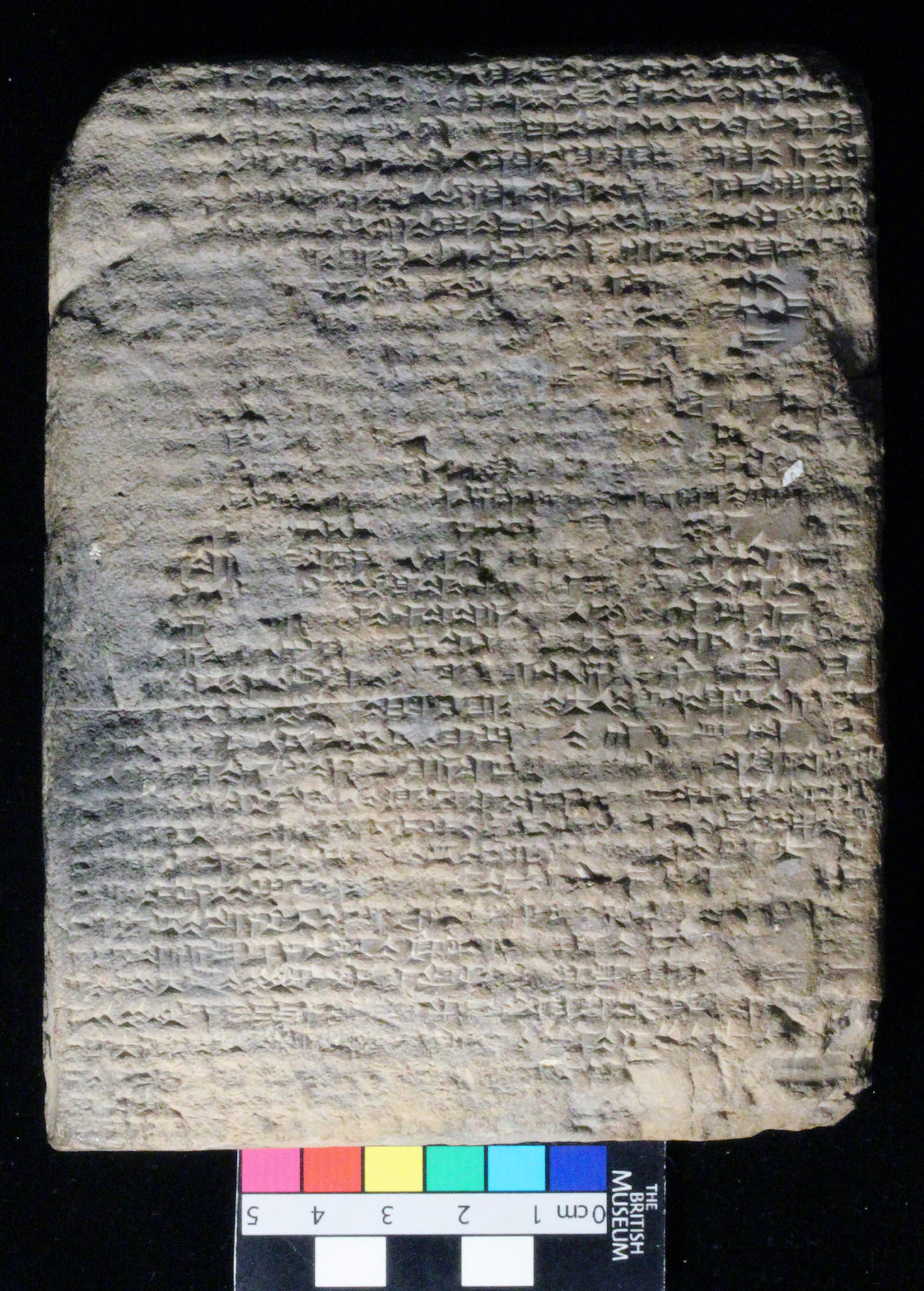 The Late Babylonian commentary tradition shows many similarities with the earlier Assyrian one, but there are also important differences, both in form and substance. The term mukallimtu, for example, popular among Nineveh scribes as a designation of their commentaries, is largely abandoned in Late Babylonian times.1 There is also a more pronounced tendency in Babylonian commentaries to transcend the literal sense of their base texts by using a whole arsenal of speculative philology, including etymological and etymographical analysis, often informed by references to Sumerian words, as well as quotations from literary and other texts.

Among the datable commentaries from Babylon, eleven, all owned by members of the influential Egibi family, can be assigned to the late second century BCE, that is, to the last phase of cuneiform civilization. The latest cuneiform commentary with a date formula, DT 35 (CCP 3.8.2.B, see image on the right), was written on the 23rd day of the twelfth month of the year 103 BCE; it contains comments on a text dealing with auspicious months. A few of these late tablets refer to leather scrolls (magallatu), which may suggest that the practice of writing cuneiform commentaries went on even longer, but now on a different – and perishable – medium.

The Mesopotamian scholars of the Achaemenid, Hellenistic, and Parthian times interacted on a regular basis with Judeans, Persians, and Greeks, who had come to live in Mesopotamia during the second half of the first millennium BCE. While their own texts show comparatively little indication that they were influenced by any of these groups, it has become increasingly apparent in the past two decades that the intellectual pursuits of the newcomers draw to a significant extent on Babylonian models. This may also apply to the Mesopotamian commentary tradition. Rabbinic hermeneutics in particular, albeit attested only from later periods, display a number of marked similarities with Babylonian exegesis (see the section Akkadian Commentaries and Early Hebrew Exegesis). These include the atomistic, lemma-based way scholars from both traditions excerpted items they wished to explain; the use of various forms of ‘creative philology,’ among them paronomasia (creating links between words that sound alike) and notarikon (deriving new meanings from individual parts of words); the ‘intertextual,’ and not just ‘metatextual,’ nature of many explanations; and affinities between a number of technical terms that were used to label certain hermeneutical procedures. For example, the Babylonian word šanîš “secondly,” which introduces alternative explanations, has a counterpart in the Hebrew expression davar aḥer “another matter,” while the term used in Mesopotamian commentaries to mark quotations from the base text, ša iqbû “(this is) what (the text) says,” corresponds to Hebrew še-ne’emar “(this is) what is said (in the text).” Even though neither these nor comparable word pairs are based on the direct borrowing of Babylonian terms, the correspondences are sufficiently pronounced to suggest that the affinities in the overall approach to interpreting canonical texts are not merely structural. The great Jewish exegetical tradition, while undoubtedly influenced by Greek models as well, may, therefore, also have some of its roots in ancient Babylonia.

The ancient Greek commentary tradition has similarities with the Mesopotamian one too (note, for instance, the terminological affinities between Greek ζητήματα and Akkadian mašʾaltu and Greek ἄλλως and Akkadian šanîš, as well as the correspondences between the Mesopotamian cola and the Greek diplai, both of which mark lemmata), but whether Mesopotamian hermeneutical practices had any direct influence on the classical world remains to be established.